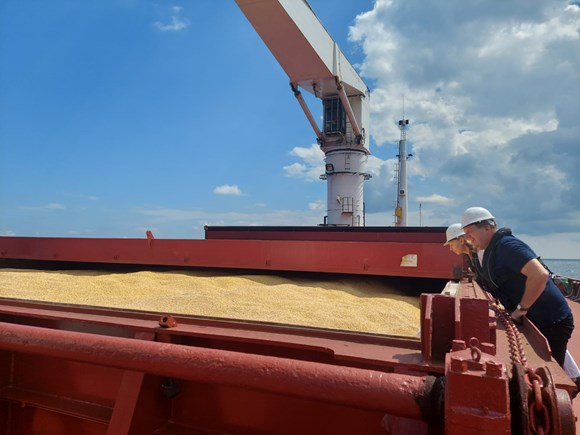 Sharing from the JCC  -

Re -sending  - Note to media: To receive updates from the JCC please email media@jcc-secretariat.org,

3 August 2022, ISTANBUL – The first shipment of over 26,000 tons of Ukrainian food under a Black Sea export deal was cleared to proceed today, towards its final destination in Lebanon.

A joint civilian inspection team comprising officials from the Russian Federation, Türkiye, Ukraine and the United Nations visited the merchant vessel Razoni this morning. Checks on cargo and crew were conducted on behalf of the Joint Coordination Centre (JCC), set up in Istanbul under the Black Sea Grain Initiative signed on 22 July.

This marks the conclusion of an initial “proof of concept” operation to execute the agreement.  Three ports in Ukraine are due to resume the export of millions of tons of wheat, corn and other crops at a time of global food insecurity.

The Razoni arrived at anchorage in Istanbul yesterday evening after sailing from Odesa port on 1 August, as the first commercial vessel carrying grain under the Black Sea Grain Initiative.

The Initiative facilitates the export of food and fertilizer from Ukraine under close monitoring.

The team carried out a three hour inspection and confirmed that crew and cargo are as authorised and consistent with the information the JCC received before the vessel sailed from Odesa.

The joint inspection team had the opportunity to discuss with the crew and gain valuable information on the vessel's journey along the maritime humanitarian corridor in the Black Sea that was agreed by the JCC.

The JCC will use this voyage in its ongoing work on fine tuning procedures and processes to enable the continuation of safe passage of commercial vessels across the Black Sea under the Initiative.

Note to media: To receive updates from the JCC please email media@jcc-secretariat.org,